How I became a Vegetarian 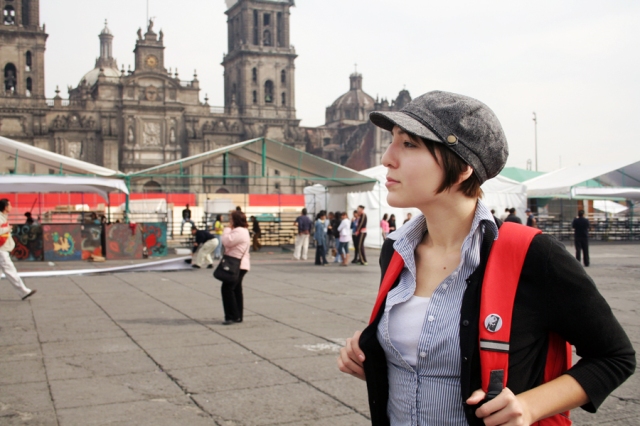 I made the decision that I didn’t really care for meat way before I actually stopped eating it. I would often find myself talking about how barbarian it was to eat meat off the bone, refusing to partake in a meal of ribs. I also found the idea of meat being cooked below well-done completely disgusting. I didn’t want to stop eating meat, but I also didn’t want to know that what I was eating used to be alive and most likely, adorable. I’ve always loved animals, influenced by my father who would watch nature programs on TV all the time. He has always had a great respect for animals, growing up on a farm and once caring for several chickens of his own. This did not keep him from chowing down on enormous quantities of meat, we all did. Growing up in a Mexican household meant having various mexican dishes, such as carne guisada, arroz con pollo and many others for dinner every night. I was completely unaware of what it really took to make them since I was the only one in my family of five that didn’t spend time in the kitchen. My older sister Sarah really took to cooking from a young age and is currently working towards becoming a professional Chef and Nutritionist. I didn’t envy her or my mother’s job of pulling apart a whole chicken or seasoning uncooked pieces of bloody meat. When no one was around to feed me I would just make a sandwich. It’s almost a joke in my family how many sandwiches I ate in middle-school and high-school, but hiding my meat between bread might have helped me forget I was actually eating it.

At the age of twenty-two I decided to make a change in my life and become a vegetarian. I know that in the past I may have been easily swayed by media or friends, particularly over a subject matter such as diet. I had suffered the results of the Atkins Diet, passing out after losing too much weight too quickly and various Slim-Fast plans of getting thin for summer. I grew up overly concerned about my weight and diet has always been a topic that I was very sensitive about. All this said, I did not become vegetarian to lose weight. It was as simple as finally realizing where that carne guisada came from and what happened to those chickens before I ate my arroz con pollo. I was reading a popular Denton-based music blog that had advertisements running along the side. One of the images read “Meet your Meat” and it led me to a video posted on GoVeg.com. I watched only moments of it before closing my eyes and hitting stop. I didn’t need to see what was happening in those slaughterhouses, I already knew, but had been lying to myself for years. I requested the free vegetarian starter kit to learn more and have been living meat free ever since. Now I’m twenty-four year old vegetarian turned vegan who is thrilled to have this opportunity to share my experience with you.