When I became vegan I never thought I’d be able to find tortillas or tamales as good as the ones my mother made. She of course used manteca in her recipes, which almost all restaurants and bakeries do. Delicious Tamales is one locally owned exception we’ve found. 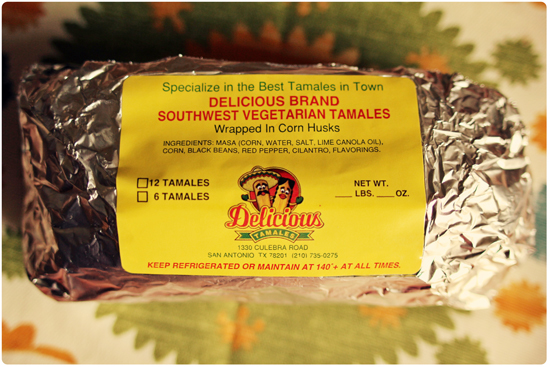 Although the majority of their tamales use lard, their Southwest Vegetarian Tamales are made with canola oil. The only other tamales we’ve found to be as delicious are at Mr. Natural in Austin. (Read more here.) They are moist and flavorful and you really don’t miss the lard. It makes me wonder why they don’t use canola oil in all their recipes. (Especially their Bean and Jalapeno variety!)

The Southwest Vegetarian tamales are only available on the weekends and you have to order them a day in advance. There are several San Antonio locations and they ship nationwide. Mark and I plan to make veggie tamales a weekend tradition!

Like Loading...
This entry was posted in Gluten-Free, Local Restaurant Reviews and tagged San Antonio, Vegan. Bookmark the permalink.